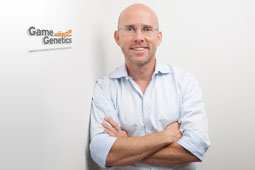 Given strength of the German browser and online PC gaming sector, it's not a surprise service providers have sprung up to help facilitates that success.

"We could have set up in London, Hamburg or Berlin, but Berlin is the start-up hub of Germany," explains CEO Alexander Piutti, about the company's location.

A serial entrepreneur who's worked as a consultant in the US, and for Yahoo! in London (following the acquisition of Overture) amongst others, Piutti is clearly a man with an eye on the big picture.

Founded in 2009, GameGenetics first move was to set up its own aggregation portal to distribute online and browser games from companies such as Bigpoint and Innogames.

Called Popmog.com, it's still operation, but Piutti says it was the wrong way to gain enough reach to add value to such publishers' businesses. After, they have their own dedicated web portals.

So instead of focusing on getting consumers directly, GameGenetics went business-to-business instead.

Specialising in what Piutti calls the "smart distribution of digital games", GameGenetics now runs 150 white label game portals for the likes of web.be, Fox and Bild.

Add in affiliates, and the sites such as Facebook, Google and Bing it buys traffic through, and GameGenetics has over 1,200 traffic partners, and 23 billion ad views per month in 174 countries.

That sort of reach sees it generate 500,000 user registrations a month.

"We need to bring value to our game publishers so we focus on their important titles. This is not a volume play on the content-side," Piutti adds.

Working closely with its partners, this typically results in small test campaigns, with volumes building as performance is optimised. At any time, GameGenetics can have up to 5,000 campaigns running across all its channels and countries.

Value of a user

Of course, the bottomline is the revenue it generates for each user its efforts get to register for a partner's game.

Average fees for online and PC browser games range from $1.80 for a US user, or €1.80 for a European, to $6.50 for a Japanese user or $0.06 for someone from Chile. That's not dissimilar from the cost range for mobile games.

However, GameGenetics doesn't get involved in incentivised downloads or registrations.

"It's all about quality traffic. If we don't deliver quality traffic, we would be slapped by our game developers," Piutti says. "It's about getting users who will be active, who will pay."

And business is good. The company generated seven-figure annual revenue in 2012, and reckons 2013 will see eight-digit revenue.

As for extending its operations to mobile and tablets that's coming as GameGenetics' partners start to release games for those platforms.

"What we do for mobile games is very similar from a process point-of-view to what we do for PC games," Piutti explains. "We look for the relevant channels and then match them with our partners. "

The only difference is in terms of technical issues such as tracking and device recognition.

The company is also looking to build up its mobile reach by releasing apps. Similar to Popmog.com, these aggregate other companies' games to increase user visibility.

Its first release has been a gaming category app for Windows 8, which was developed in conjunction with Dell and Microsoft.

"We'll be looking to build more apps like this for mobile and smart TV, especially when we can work with OEMs," Pittui says.